Inextricably linked to the ‘O’Donnell family Tree’ by virtue of the marriage of the three Martin Brothers Robert Ballyduff, Cornelius Ballylanders and Benjamin Knockadea to the three O’Donnell sisters of Spittle & later Ardrahan, Galbally.  Mary, Bridget and Ellen respectively. The O’Donnell family Tree was compiled by Terrence Heeney of Nashville, Tennessee who made his records including photographs available for reference purposes on this website. I acknowledge the contribution of Bernadette Duffy (nee Martin) & her sister Sr. Maureen FCJ of the Australia Martins for their guidance, including the Rev Monsignor Lawrence Martin history article. Editorial advice of my sister Bridget Harte (nee Martin) and Brother Jack (Bayville NJ, USA). Cousin John Murphy on Camera, as well as the many who have and will forward photo’s and family lore. – (Bill Martin)

Area in Counties Limerick & Tipperary most associated with the Martin Name

Those of Irish origin are believed to stem from ‘Mac Giolla Mhartain’ meaning ‘son of the follower of (St) Martin’.

The best known Martins were strongest in Galway city and county for centuries and were of Anglo Norman extraction, having arrived during the Anglo Norman  invasion of 1172. These Martins were one of the celebrated “Tribes of Galway”

‘Man Giolla Mhartain’ was also anglicised as ‘Gilmartin’ or ‘Kilmartin’. They were also a Sept of the Ancient Clan O’Neill, who originally held territory in the barony of Clogher in County Tyrone.

They were eventually displaced into the the adjoining counties of Sligo and Leitrim, where they are still numerous to-day. The surname Macmartin common in Antrim and Scotland is derived from the Clan O’Neill.

Reference :- Eoin (Pope) O’Mahony was compère of a regular Sunday show on Radio Éireann (Circa 1960’s & 70’s) called “MEET THE CLANS”, in which he regaled gatherings with their clan history and interviewed selected leading figures of the name. He was acclaimed on visits to the United States and had two terms as visiting professor at the University of South Illinois.

Researchers have pieced together the works of legend and tradition, and compiled documentary evidence using books by O’Hart, McLysaght and other Irish historians, and transcripts from the Book of Kells, the Falaise Rolls, Battel Abbey Rolls, the Wace poem, Irish parish records, and ancient land grants. Their conclusions are that the first record of the name Martin was found in County Galway (Irish: Gaillimh) part of the province of Connacht, located on the west coast of the Island, where they had been granted lands by Strongbow after the Norman invasion of Ireland in 1172, and became one of the “Tribes of Galway.”

MARTIN is an Anglicized surname for a much older, ancient proto-Celtic tribe, who arrived in Ireland roughly 2000 years ago. The Mairtine are noted in the Book of Munster and other historical documents. Later surname variations include Mac Giolla Mhártain, Ó Maol Mhartain, Ó Martain, Ó Máirtín, Mac Máirtín, Mac Máel Martain and were probably distantly related from a Celtoid root stock.

Recent DNA evidence has this group in Ireland for 3000 years and aligning with the Ulaidh, Errain, and the Eóghanacht in Munster and later in the Dal Riata kinship groups.

Confusion in spelling arose when families attempted to translate the surname from the Gaelic to English, or vice versa. Although your name, Martin, occurred in many references, from time to time the surname was recorded as Gilmartin, Kilmartin, MacKilmartin, MacGilmartin and Martin and these changes in spelling frequently occurred, even between father and son. It was not uncommon for a person to be born with one spelling, married with another, and to have yet another recorded at his wake. The O’ prefix, or Mc prefix, was dropped or assumed depending on the fashion of the time. Church officials and scribes interpreted the name either in English or in Gaelic, spelling it just as it sounded.

The ancient Milesian Kings, specifically, the grandson of Breoghan(Brian), King of Galicia, Andalusia, Murcia, Castile and Portugal, were the ancient progenitors of the Dalcassian race. Milesius, a great general/king was instrumental in defending Egypt from the King of Ethiopia. In gratitude, the Pharaoh of Egypt gave his daughter, Scota, to Milesius for his wife. Later, Milesius sent his uncle northward from Spain with his own son Lughaidh to explore the western Isles. This was to fulfill an ancient Druidic prophecy.

On finding that his son had been murdered in Ireland by the three resident Kings(the Danans), Milesius gathered an army to take his revenge on the Irish. He died before he embarked on the trip. His remaining eight sons conquered Ireland and renamed it the land of the Scoti. The four Irish kingdoms (Heremon, Heber, Ir and Ithe) eventually broke into five separate nations under one High King, or Ard Righ.

Dermot McMurrough, in his fight for the position of Ard Righ, in 1172 requested King Henry II of England for assistance. This was the first intrusion into Ireland of the Anglo/Normans who had been waiting for such an opportunity. Many native Irish noble families lost their land and possessions. Henry of England commanded the Earl of Pembroke, nicknamed Strongbow, to help Dermott in his fight for the crown of Ireland. Strongbow recruited 2000 trained mercenaries, Norman nobles trained in the tradition of those warriors who had performed so well at Hastings, soldiers of Norman, Welsh or Cornish background from south Wales, and sailed for Ireland. Many of these Normans, land owners and their knights and squires, were direct descendants of those nobles who had fought at the Battle of Hastings and been granted lands in south Wales and south-western England.

The battles against the untrained, badly clad Irish were short, swift and sure, but, in the end, it was Henry and Strongbow who held the reins of power in Ireland, not Dermot McMurrough. Strongbow doled out to his army commanders much of the confiscated Irish land in southern Ireland. Ironically, after several centuries, the invaders became more Irish than the native families. Those Anglo/Norman surnames such as Burke, Fitzpatrick, Fitzgerald, Power, Prendergast, Walsh, including the family name Martin, became the backbone of southern Irish society. 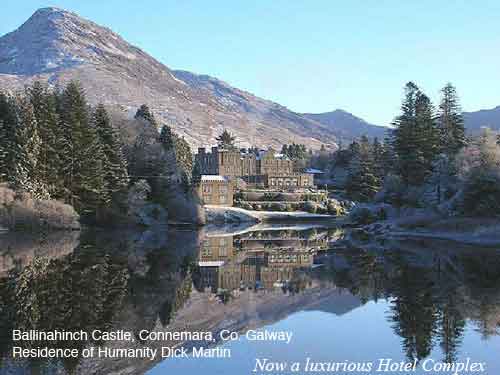 The Norman invasion was followed by Cromwell’s invasion in 1640, when further loss of land befell the unfortunate Irish people, including the Anglo/Norman settlers. Ulster in the north was seeded with Protestant Scottish and English families. And, again, the sept of Martin was amongst the great Irish families to lose their ancient territories.

The now Irish family Martin emerged in later years as a distinguished family in County Galway where they were recorded as a family of great antiquity seated at Tullyra with manor and estates in that county. Soon after acquiring these territories the Chief became Gaelicized Giolla Earnain O’Martain, and they branched to the county of Tyrone. This name became Anglicized as Gilmartin and Kilmartin sometimes with Mac prefixes and we derive many unusual characters from the Clann, including “Hair Trigger Dick” and “Humanity Dick” and the celebrated Princess of Connemara.

Notable amongst the family up to this time was Francis Martin (1652-1722), an Irish Augustinian, born in Galway during the occupation of the town by the Cromwellian army; and Richard Martyn (c.1600-1648), the noted Irish Confederate.

In 1845, the Great Potato Famine culminated several years of famine causing widespread poverty and starvation, and the great exodus from Ireland began. Within fifty years the population was reduced to less than half. Many joined the armada of sailing ships which sailed from Belfast, Dublin, Cork, Holyhead, Liverpool and Glasgow, all bound for the New World. Some called these small ships the “White Sails,” others, more realistically, called them the “Coffin Ships,” voyaging across the Atlantic when 25 percent of the passengers died of diseases and the elements.

Heraldry, in its early form, was probably introduced to Ireland by the Anglo-Normans around 1172, but by then the practice of using symbols to identify important individuals would not have been unknown to the Irish. It was not until much later that heraldry was regulated by the English Crown, and Irish symbols were then included in the armory.

An Achievement of Arms such as the Martin arms depicted on the left typically consists of these parts: the Escrolls, displaying the family motto and name, the family crest (if any) seen above the helmet, the actual Coat of arms (also known as ‘arms,’ or ‘the shield’), the Helmet depicted below the crest, the Torse on top of the helmet, and the Mantle draped from the helmet. Each of these elements will be described below. Supporters were a later addition to the Achievement; they are somewhat rare, and are usually personal to the grantee.

The mantle was spread over and draped from the helmet and served as a protection, ‘to repel the extremities of wet, cold, and heat, and to preserve the armour from rust.’ The numerous cuts and slits suggest that it had been torn and hacked on the field of battle. The style or design of the mantling is up to the individual heraldic artist, and it is usually depicted in the main color and metal from the shield. The helmet (or Helm) varied in shape in different ages and countries, often depicting rank. The Esquire’s Helm, as depicted here, is generally shown silver, with a closed visor and facing to the dexter (its right). On top of the helmet is a Torse or wreath which was formed by two pieces of silk twisted together. Its purpose was to hold the crest and mantle on the Helm

The motto was originally a war cry or slogan. Mottoes first began to be shown with arms in the 14th and 15th centuries, but were not in general use until the 17th century. Thus the oldest coats of arms generally do not include a motto. Mottoes seldom form part of the grant of arms: Under most heraldic authorities, a motto is an optional component of the coat of arms, and can be added to or changed at will; many families have chosen not to display a motto.

The motto for the Martin coat of arms displayed here is:

My help is from the Lord.

Shields (or Escutcheons) at first were painted simply with one or more bands of colour ‘ordinaries’. Later, the ordinaries were used in conjunction with other figures or symbols. The Coat of Arms for the surname Martin can be described as follows:
MARTIN ARMS

A blue shield with a silver cross calvary charged on the dexter side by a sun, and on the sinister side by a crescent. 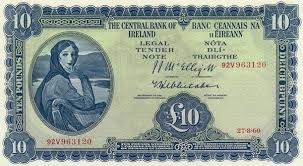 Born in Chicago, Hazel Martyn was the only daughter of Edward Jenner Martyn, a wealthy industrialist of Anglo-Irish extraction whose origins were rooted in Galway. A contemporary account refers to young Hazel Martyn as “The Most Beautiful Girl in the Midwest”.

In 1903, she married Edward Livingston Trudeau Jr, a physician who died five months later. In 1904, while still married to Trudeau, she met John Lavery, a Catholic-born painter originally from Belfast. Her husband died shortly thereafter, and in 1909 she and Lavery married. Subsequently she became Lavery’s most frequent sitter. During World War I, John Lavery became an official artist for the British government. In 1918, he received a knighthood, and Hazel Lavery became Lady Lavery.

As if in reaction to his services to the Empire, Sir John and Lady Lavery ‘rediscovered’ their Irish roots during the 1920s; but this led to a genuine engagement with the topical question of Home Rule, and Lavery painted several portraits of Irish Republican figures, including that of Michael Collins and Éamon de Valera – who would be instrumental in keeping Éire out of the next world war.

The Laverys lent their palatial house at Cromwell Place in South Kensington to the Irish delegation led by Michael Collins during negotiations for the Anglo-Irish Treaty in 1921. After Lady Lavery died in 1935 in London, her funeral mass took place at the Brompton Oratory in Knightsbridge. She was buried with her husband in Putney Vale Cemetery. In Ireland, a memorial service for her took place at the request of the government. 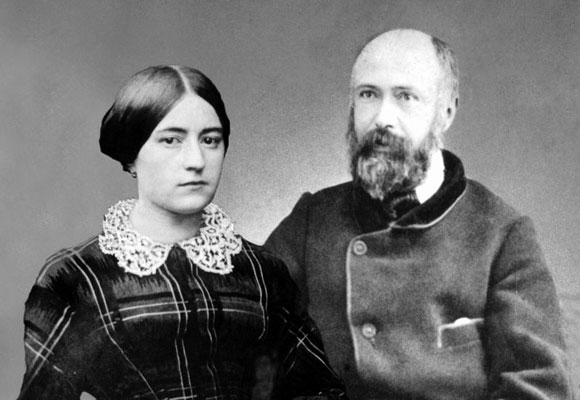 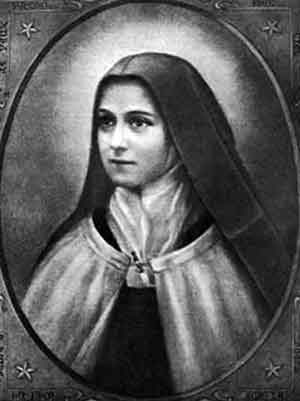 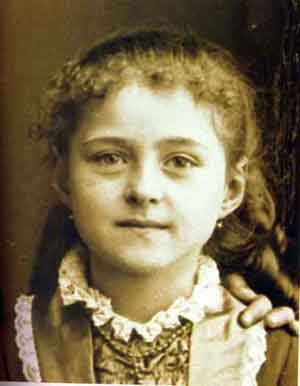 Therese Martin as a young girl